On further review, the shortcoming that prevents my further improvement is that I'm a moron:

I didn't want to post about this one, but my friend Tim saw the result on the Marshall website. He emailed me demanding the game, and I was reluctant to disappoint half my readership, so here it is.

Do I have a theory about why I play moves like 6...Bf5? (Aside from the above obvious explanation.) Of course I do--my brain produces theories like rotting meat produces maggots; nor do the similarities end there.

But there's no reason anyone should be even slightly interested in my latest theory, since I clearly know nothing whatever about Chess. So to hell with it.

In the comments to my last post, Tempo asked me what my shortcomings are that prevent further improvement, and I replied: "The short answer is that it probably poor selection of candidates and/or limited ability to visualize positions 5 or 6 ply down a forcing sequence. That's why I'm trying the Hertan and Dvoretsky books. The long answer will be a blog post in a day or two." I guess this is that post.

The long answer is that every part of my game seems weak, to the extent that everything I've done to improve has resulted in finding new ways to lose.

In a post last March that I've referred to recently, I listed all the things I did in the last couple of years. I concluded, "a hundred point difference could be chance", and I have begun to think that it was. Also, you could argue that it wasn't a hundred points, either--my rating only moved 50 points, the other 50 was a combination of bad performance when my rating was crashing down and good performance when it was recovering.

I worked my opening repertoire, partly because I'd noticed that in games where I used a lot of time in the first 10 moves, I did poorly even when I got a good position. That "worked"--I rarely get out of book early now, and when I do it's just as likely that it's because I'm refuting bad play by my opponent as forgetting my lines, and so my score in those games is just as good as my score in games where I don't use up a lot of time in the opening. But my rating overall doesn't move.

I did a lot of work on tactics, and I can see that I make fewer outright blunders than I did. By my rating doesn't move--I miss tactics several moves down a variation instead in the first couple of moves.

I worked on visualizing positions, and I can play through games blindfold pretty well--but I don't seem to see the possible continuations in the positions I visualize.

And so on. I do things to improve certain perceived problems, and those problems get a but better--and something else causes me to lose anyway, so my rating doesn't move.

Maybe I'm just grumpy. Maybe having a rating 50 points higher than a couple of years back indicates a real (but slow) improvement.

Anyway. I'll be working on visualization and especially on candidate selection, because those seem like obvious problems. I can point at places in my games where I didn't consider the strongest move at all, especially a few moves down the tree of variations. We'll see how that works.

Warning: I'm the kind of geek who keeps detailed lists and statistics. Here come some now:

Almost all those games were played at 30 moves in 90 minutes (followed by one hour smash clock); 5 games from the Marshall Championship were 40/120, and 4 from the Marshall Amateur Team were Game/120. I never played much at fast time controls, and don't think I ever will.

As Black, my Caro-Kann continued invincible (+7 =9 -0, 2190), with a performance over 2350 against players rated 2000 or above. I've lost only one game with the Caro since I took it up, against GM Charbonneau. I draw a little too much with it against weaker players, but that's the last thing I'm going to worry about at the moment.

Against closed openings, not so successful, although my Queen's Gambit Declined started doing OK (almost 2300, in fact) after being around 2000 the last couple of years). But I've already looked over Vigus' _Play The Slav_ and will start using that. Maybe playing 1...c6 against the English and ...d5/...c6 against the Reti will help with my sub-2000 performance against those.

Anyway, I hope not to study openings too much this year. My wife--who indulges my hobby terribly--got me three books for Christmas: Hertan's Forcing Chess Moves, Lars Bo Hansen's How Chess Games Are Won And Lost, and Dvoretsky's Analytical Manual. I'm working on the Hertan book now, and a bit on the Hansen; later I'll move on to the Analytical Manual. I also need to buckle down to analyzing my own games.

I suspect it's all futile in terms of improvement, but I won't know unless I try.

Here's a game I'd like to forget--I'm posting it to make sure I don't. My opponent is about 12 years old, and his name may be familiar to those of you who read the Marshall Chess Club blog.

And that concludes my chessplaying year. At the very least.

Lev Alburt's Chess Pocket Training Book II, like his first pocket training book, is a nice little collection of positions--many tactics, but also endgames and positional problems--in a handy little book suitable for sticking in the pocket of your jacket or overcoat.

Here's a nice little problem from it--not hard, but pretty: 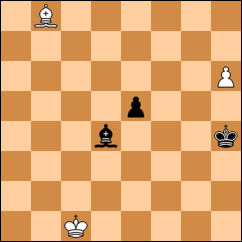 Solution will appear in the comments after Christmas (or when Tempo sees it).

I've been reading Charles Hertan's Forcing Chess Moves. It looks pretty good so far (I just finished the first chapter; I'll write a review when I've finished the book). It may be pitched just a bit low for me, but it has some very nice positions in it. Here's one: 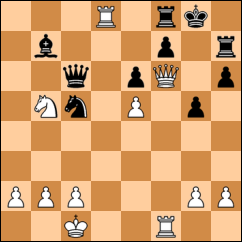 Solution in the comments.

Illness, work deadlines, Seasonal Affective Disorder. No Chess playing this last month, and so no blogging.

Normal service to resume shortly. Happy Solstice to all, and best wishes for the holidays of your choice.

I'm very pleased with the game I played last Thursday night against IM Renato Naranja. There are plenty of mistakes by both sides, but it was a good fighting game. And I got to offer sacrifices of both Rooks. And sac a Bishop at the end. And it's not another member of the "almost a good game except I screwed it up at the end" club.

As I said, lots of mistakes, but it's a game I'll remember.

Here's another nice game of mine from the Marshall Championship. My opponent is a strong young master who--I'm told--is something of a theoretical expert on the opening variation in this game.

I was pretty happy to have held the draw, but it was the kind of game where losing wouldn't bother me unless it was because of some gross blunder. I found the middlegame fascinating.

In the comments to this post by Temposchlucker, I've been discussing pawn-up endgames where the superior side should avoid trading certain pieces. There's an example at move 30 of this game; White would be much better off if Black couldn't force the Queens off.

My Best Game From The Marshall Championship

To start clearing my backlog, here's my most fun game from the Marshall Championship. My opponent was a pleasant young fellow who recently wrote an engaging article for Chess Life about his struggle to get his rating over 2200. (Here's a popup javascript viewer of the game.) 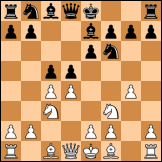 I think this is advocated in one of those books on surprise lines- _Secrets of Opening Stupidity_ or _Dangerous Boomerangs: 1.d4 d5_ or something of that ilk.

9 minutes. It seemed right to play a Semi-Tarrasch with g4 in for White.

Despite the airyness of the Kingside, White should probably play 9.Bg2 and O-O. Then Black is only slightly better.

16 minutes. Decided I wanted as many open lines as possible with his King permanently in the center; 9...Nc6 10.Bg2 cxd4 11.Nxd4! is not exactly "good" for White, but seems less awful. However, there may have been a slight flaw in my reasoning.

He spent 12 minutes, and was only 5 minutes ahead of me on the clock. This is "pseudo-agressive"; what is White going to do, deliver mate on the g-file? Developing some pieces might be a good idea. 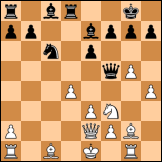 only 3 minutes on this move. 16...Nc2+ is also very strong, perhaps better than this.

11 minutes, ...Rac8 being the main alternative. 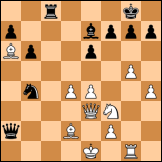 Time to work it out

Ah, I had forgotten that the Rook was going to be loose if I won the Queen. I took 18 minutes, leaving 16, and worked out what I thought was a clearer win. Gratifyingly, Crafty seems to agree with my analysis. 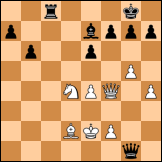 This pretty much ends White's counterplay.

I was actually rocked by this, but it appears it only took me a minute (of my 4 remaining) to work it out. (If the mating line weren't there, 38...Qa4 is also easily winning.)

Ed Gaillard stopped playing tournament chess for a dozen years and has been trying to get back into form since he returned to the lists in 2003. This is his story, and he's sticking with it.
(email der alter Goniff)